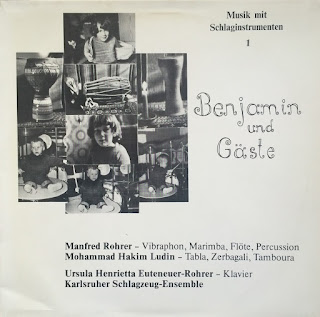 don't hang around, enjoy good music!
Posted by Lisa Sinder at 3:01 AM

Fantastic (as always)! Thanks!

I was curious and did a little research on this album since discogs doesn't even list it. The band's name was actually Benjamin and the "Gaste" is just "guests" who are the drum ensemble playing on track 4 only. Benjamin was a trio comprised of husband & wife Manfred & Ursula Rohrer (she a pianist well-known in academic music circles of the time) as well as percussionist Mohammad Hakim Ludin. These same three musicians also performed on other "Musik mit Schlaginstrumenten" (Music with Pop Instrumentation) recordings, but not under the Benjamin band name. This album appears to be a series of library music recordings issued on vinyl, this being the first volume of the series.

Always fun going through the music you post and sorting out the unknown gems from the rubble. Thanks for your continued excellence!