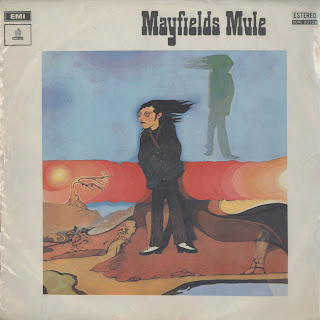 This is the missing link lp in Andy Scott's career. This album has not been released in the UK, Europe or Us. It was released only in Uraguay.


Andy Scott's career started with the release of 'Expansions on Life' with the Elastic Band. Co-members in this band were Sean Jenkins - drums, Ted Yeadon - vocals, organ and Mike Scott bass. This band split when Ted Yeadon left to join the Love Affair. Expansions on Life is now a very sought after prog lp. After the split, the remaining members joined Chris Mayfield to form 'Mayfields Mule'. They released a number of singles and recorded this album. However, as mentioned before, it was never properly released. Andy Scott then went on to join the Sweet. Popsike

Link
Posted by Lisa Sinder at 7:03 AM

Hello, somebody have the lp of Mayfield`s Mule, made in Uruguay?
Bye
George

great post. thank you lisa. i've never heard this one,but thanks to you now i will.