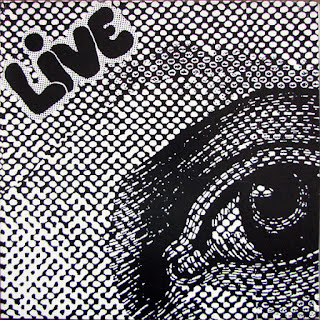 don't hang around, enjoy good music!
Posted by Lisa Sinder at 5:52 AM

Thanks again for some great offerings, but who were Live? Couldn't find anything about them. Any info would be appreciated, thanks!

Germans Live were born in 1971 in Unna out of the ashes of the group Jonah with bandmates Martin Knaden (guitar, vocals) and Norbert Aufmhof (organ, flute) searching for new members to form a new group.They met bassist Gerd Schmidt and drummer Jurgen Schimmel, having afterwards a good live activity around the Unna district, even playing along with Golden Earing.As Knaden left in 1972 to join Curly Curve, he was replaced by Gerd Klein with Live having now a more keyboard-dominated sound with Aufmhof as their leader.More gigs followed, playing next to Supersister, Atlantis, Epitaph and Kraan, but they only managed to come up with a single in 1974, despite having already recorded material for a full-length release, due to hassles between the members.20 years later and after their only single became a sought after collector's item, Klein decided to make Live's recording available in vinyl format, pressed in about 500 copies.

Live's style was dominated by Aufmhof's driving Hammond organ and his delicate flute work, playing a nice Heavy/Psychedelic Rock with both British and Kraut Rock influences, incorporating light Classical Music touches in their music.With tracks about 7 minutes long a piece, they had enough space to go on for instrumental passages with extended organ runs and rhytmic guitar parts, stepping with one foot on early-70's Proto Prog stylings and the other offering stretched instrumental jams similar to the German Kraut Rock school.Guitars move from heavy, psychedelic grooves to bluesy, punchy solos and Aufmhof's organ stars from symphonic vibes to ends up in long and atmospheric washes.Vocals come in English with Schmidt's emphatic vocals in the forefront (he was previously a singer with the Frankfurt-based band Chain).There are no particular surprises in Live's sound, the main character of the group was quite similar to Kraut Rock bands like JANE, TOMORROW'S GIFT, TYBURN TALL and EPITAPH, mixing mellow, psychedelic atmospheres with heavier, organ-driven themes.

The same album was reissued in CD by Garden of Delights a decade later, featuring additionally a very early jamming session of Live, dating in 1971, showing a vastly different sound, closer to Kraut/Jazz Rock with extended improvisations on guitars and flute ala CHRIS HINZE and less focus on keyboards.

A lost document of mid-70's Kraut Rock.Raw, organ-led Progressive Rock with plenty of psychedelic influences.If you love the sound, this album could be much more than rewarding.Recommended. apps79