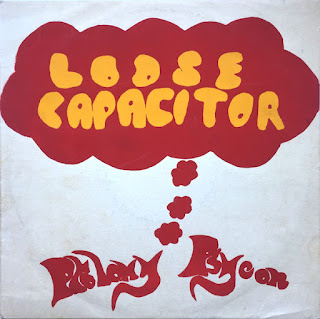 don't hang around, enjoy good music!
Posted by Lisa Sinder at 4:10 AM

The following text was extracted from the somewhat apparently börkëd following link:

(And with apologies for any formatting errors)
Ptolomy Psycon

'..Back in the summer of 1971 Wrekin's first pop group 'Ptolomy Psycon' recorded a 10" EP bearing the strange title "Loose Capacitor".

Formed at school in 1969 at a time when there were some concerns about pop culture, this band of rebels had to practice below the school radar, hiding away in the music school playing on acoustic guitars and a piano.

In the spring of 1970 Ptolomy Psycon was kindly given permission by Headmaster, the late Robert Dahl, to practice at weekends but only if "proper" instruments
were used alongside "electronic" instruments.
This directive inspired Tim Wood to compose "Azreal" for group and a small orchestra of loyal friends
who gave their time to support the project.

In March 1971 "Azreal" was played for the first time at an Arts Society concert called "Two Pi Radians" in the Memorial Hall.

In June 1971 all three original tracks were recorded at school by Hollick&Taylor, Birmingham as a single, one-take, two-track stereo recording with no subsequent re-mixing. During the recording of "No One To Blame" one of the group's amps developed a fault. The unintended, howling feedback at the end of this track is possibly what labelled the music as psychedelic rock, all caused by a faulty solder joint and a "loose" capacitor.

Some 47 years later, original copies of Ptolomy Psycon's 3-track 10" EP "Loose Capacitor" have become very rare and highly sought-after "holy grail" items. Appearing on the radar screens and wanted lists of specialist vinyl collectors worldwide, it is hard to believe that in recent years, original copies in
excellent condition have sold via online auctions for in excess of £1000.

During this time Ptolomy Psycon's music has been played on a number of FM stations around the world, has been posted on a number of YouTube sites and has even appeared on two white label, bootleg compilation albums released in 1991 - "The Psychedelic Salvage Company", Volumes 1 and 2.

At that time no group members were aware of
these bootleg albums.

Wrekinians past and present may wish to obtain a copy of the re-mastered/re-released version of "Loose Capacitor" via Record Collector Magazine.
Their January 2019 edition will have a 2000+ word feature written by Record Collector's Ian Shirley, telling the story behind this strange record, a part of Wrekin history.

If you would like to contact the band members please email the Development Office and we will provide details.'