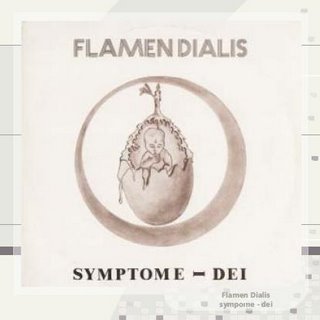 After releasing a 45 in England in 1971 as the Yecta Plus Band (a trio, with guitars, vocals, and keyboards) Didier Le Gallic (keyboards, drums) formed Flamen Dialis (a designation, from ancient Roman times, of the highest priest of Jupiter) in 1976. Flamen Dialis recorded a 7" that was released in 1978 (in their first formation, Flamen Dialis were T. Tanguy: pianos & vocals; D. Le Gallic: guitars and percussion; L. Le Clech: vocals, and B.B. L'Helgouach, chants). The basic components for their following masterpiece are evident on this short release.
For their 1979 LP Symptome Dei, Flamen Dialis added a number of players, vocalists, and instruments, and the band's sound became much richer and dense. The music developed an otherworldly atmosphere. The combination of child-like melodies composed around sequences of unearthly themes and solemn chanting, whispers, and injections of flute, bombarde (an ancient twin-reed instrument, precursor of the oboe) and vibraphone weave a sound that is both disquieting and dreamy. 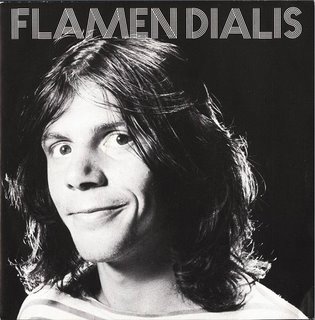 Yet with the next breath, the atmosphere can turn both heavy and strangely familiar. Layers of Mellotron and airy keyboard sonorities further underscore the music's dramatic tensions. Elements of this recording call to mind Franco Battiato's Fetus and Pollution and the vocal exercises share similarities with the French group Magma, although Flamen Dialis are certainly unique for their impressionist cosmic music and a powerful dramatic intensity.
The group's first 45 is included as the bonus tracks on our CD reissue. These two releases represent the group's entire body of work. MIO Records

thanks for this prog-psych album
never heard it before

Hey what a cool post! Thanks! I really like the mix of keys and oblong rhythms on this one. Stay cool!