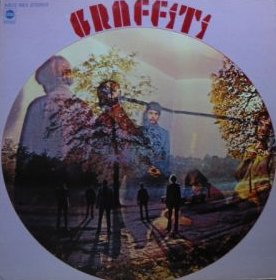 Produced by Bob Thiele (Ford Theatre, Eden's Children etc.), Eddie Kramer and Jay Senter, their album is a mix of light and heavy rock with some occasionally excellent guitar solos, leaning more towards progressive than acid or psych. Strunz and Benderoth, sometimes helped by St. John and Taylor, wrote all the songs, except Ugly Mascara penned by Ronald Hovanecz.
The band were based in Greenwich Village, having relocated from Washington DC when they were known as The Button, (which was the final incarnation of The Hangmen). The Button line-up included drummer Bob Berberich who returned to DC, teamed up with two other ex-Hangmen and Nils Lofgren to form Paul Dowell and The Dolphin and later Grin.
The CD reissue includes the non-LP He's Got The Knack. The track, which can also be found on Turds On A Bum Ride Vol. 3(CD) and World Of Acid(LP), is a fast 'n' fuzzy mainly instrumental post-Vanilla Fudge rocker. The 45's flip Love In Spite is also pretty good heavy stuff too.
(Vernon Joynson / Max Waller/Stephane Rebeschini/Bob Embrey) Fuzz, Acid & Flowers

Link
Posted by Lisa Sinder at 8:31 AM

thanks for another great lp. really enjoy the posts. have found some cool iteims i have looked for for years. have morly grey or mystic siva? thanks BB

Wow, Lisa, you've done it again! My mind is blown.

Lisa, Thank you so much for your wonderful web site. I love obscure Hard Rock and Progressive and have gotten so much from you thanks.

ABC records was a feast of obscure psych rock between '68-'71! Some other great ones are Fraternity of Man (the Bogart boys), Salvation, and Eden's Children. This one has been eluding me!!

Hello Lisa, Graffiti is the last one of all the great albums you published on your blog that i took. I told you i did some new music out of them. I'm a cut-and-paste addict, only taking my samples from genuine albums (late 60's early 70's, whaterever style it is said to belong to). So i put online a 12-tracks album called Moo, with almost all samples taken from the albums you ripped. Please have your ears on it and tell me what you think. I'd love to ask you a favor : i think it lacks from vocals, so if you have albums/songs from that area with strong stereo (voice on one channel, music on the other), i'd be extremely thanksful to you to upload them :

great blog indeed, but unfortunately link for graffiti seems to be dead i believe.